The Game of Letters Gone Astray

The Idea is Born

In 2017, my then girlfriend Jennifer (who is now my wife) and I were on a drive back home from spending the day at a local gaming cafe when we spotted a license plate that looked a little something like this:

Initially, we were both looking for a set of double letters or numbers for a goofy game we like to play on long drives. However, something about this license plate made me pause. I couldn't quite figure out what it was until it hit me that the first 3 letters on the plate kind of looked like the word "Salon". Upon pointing this out to Jennifer, she responded with "Or Saline". And, just like that, Vowl was born.

For the rest of that hour-long trip home, we would race to try to make words out of letters we found on license plates. As we continued to play, I realized that the game needed some more well-established rules to give it a feeling of consistency. It couldn't just be "Use the letters however you want." It was far too easy that way!

We started by saying that you couldn't rearrange the letters in any way. When we came across plates that had vowels on them, they seemed far too easy and didn't really fit with the spirit of the idea. So, I decided you could only use plates with consonants. Then we realized that allowing double vowels or consonants was also typically too easy. Just like that, the game developed into a unique kind of challenge where we would try to see if we could recognize words with their vowels removed.

Over the course of the next three years, a lot would change with the game, but those basic rules that worked so well never changed. Vowl is made up of hundreds of word puzzles which all follow the same basic set of 4 simple rules:

When I got back to my house that day, I searched through my desk for some index cards, typed up as many puzzles as I could come up with and then hit print. That first copy (which at the time I just called VWL) only had 75 cards and when I finally got some friends to sit down and play it with me, boy was it fun! Back then, the goal was just to see who could get through the most cards in 30 seconds. Even as we went through the deck again and again, we still found ourselves consistently getting stuck on cards that we'd already seen plenty of times before, and the added time stress certainly didn't help matters much.

From then on, anytime I ran into someone who had played the game, they'd give me another word that fit the into the rules of VWL which I'd jot down on a piece of paper to add to the game. Every day, it felt like I was also coming up with 10, 15, 20 more words that I could add to the game. Eventually, I started to realize that some puzzles were more difficult than others, and I began to sort the cards based on their difficulty level. While the first prototype had just 75 cards, by the time I got around to the third prototype, the deck had grown to nearly 300!

For 1-2 years the game (which I had began to start calling "Vowel") was just racing to see who could get through the most cards in 30 seconds. Every once in a while I would try out a new sort of twist like playing with a partner or going head-to-head against someone, but for the most part Vowel's only development was just a constantly growing deck of cards.

As time went on, however, people who had played the game in the past kept coming back to me asking when I was going to get it published. At that point, I realized that if I wanted this to be any more than just a giant deck of cards, I was going to need to get serious about actually developing it into something more.

The first step to refining Vowel was settling into how I wanted the game to be played. While I really liked my standard "see how many cards you can get through in X amount of time", I didn't want your turns to all feel the same. I wanted gameplay to have a nice variety to it, which (after a whole lot of playtesting) I eventually found through the use of dice.

On your turn, you roll both the number die and the game mode die. You'll draw cards from the basic deck (the easier cards in the game) equal to the number you rolled: either a 3 or a 4. The game-mode die will then tell which of the 3 unique game modes you'll be playing in.

Then, you just flip the sand timer and race to get through the cards! This may sound (and seem) easy at first. But as you start going up on the game's tiered scoring track, you'll have to start drawing extra cards from more difficult decks. As time goes on, it just gets harder and harder!

I knew from the get-go that I wanted Vowl to feel accessible to as many people as possible. This meant keeping the rules simple and straightforward enough that even people who don't typically play a lot of board games can pick it up quickly and have a good time. However, I also knew that I wanted the game to appeal to more regular gamers as well.

While I am really proud of having come up with such a clever base concept for Vowl, I am even more proud of coming up with, what I think, is a fresh new type of scoring system that provides players with a nice amount of strategic decision making without being overly complicated.

If you are able to successfully get through all of your cards before time runs out (or before your opponent in head-to-head play) then you will get to choose how you score points:

1) You can move your scoring token forward exactly 2 spaces.

That second option is a really important one. Your victory token determines how many points you have to have in order to win. By lowering your victory token one space, you'll be making your future turns a little easier since you won't have to go through the harder spaces of the scoring track. However, in exchange for doing this, you also have to move an opponent's victory token down 1 space, which will help them out as well.

This forces players to make decisions that are, sometimes, incredibly difficult to make. If you move forward two spaces, you may have to draw two extra basic cards on your next turn... If you move forward just 1 space, you'll only have to draw 1 extra basic card on your next turn and you'll get to lower your victory condition, but you'll also be helping out an opponent by lowering their victory condition as well.

Coincidentally, the scoring system seems to be incredibly popular among the few reviewers that have received pre-production copies:

Vowl: The Game of Letters Gone Astray officially launches on Kickstarter on August 3rd, and I couldn't be happier with how the end product looks and plays. The art and graphic design have been done by the fantastic Tristam Rossin who I can't thank enough for his absolutely incredible work. You can read his post all about his art and design process for Vowl (and why the game is now called "Vowl") HERE. 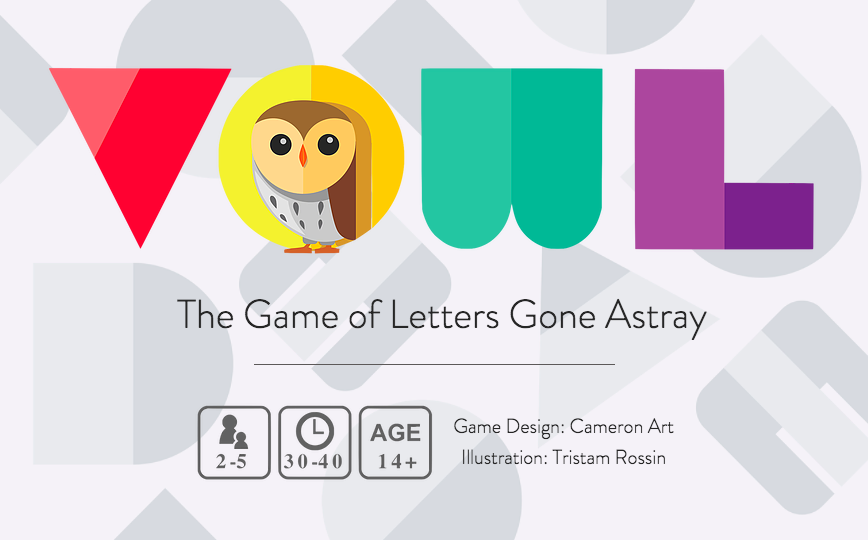 The final version of Vowl includes 380 unique cards (which may go up to 440 if we reach certain stretch goals), a tiered scoring board, 2 custom printed dice, player tokens and a 25-second sand timer. For players looking to customize their difficulty, the game will also include a more difficult 15-second sand timer to give turns even more of a time crunch and an advanced side to the scoring board for longer and more difficult games.

For anyone unfamiliar with how Kickstarter works here is quick summary:

Kickstarter is a crowdfunding site in which you pool contributions from various people to support a project in exchange for various rewards. Kickstarter is the most widely used crowdfunding website. However, if the funding goal isn’t reached within a certain timeframe, then the game won't be created. No one is charged a cent, and no rewards are distributed.

This means that we need YOUR HELP to make this game a reality! As a first-time creator with a very small marketing budget, I have to rely on word-of-mouth and community support to help bring more people to our Kickstarter page. If you want to show your support, please FOLLOW OUR PRE-LAUNCH PAGE so that you are notified when the project launches on August 3rd. Please also consider sharing this post with anyone that you think might be interested in checking out the campaign, so that we can get enough backers to reach our funding goal.

The most important day of a Kickstarter campaign is launch day, so we need as many people as we can get checking out the campaign when it goes live. Plus, if we are able to successfully hit our funding goal in the first 48 hours, we're going to add 20 extra cards to the game!

Thank you all so much for your support! If you have absolutely any questions or comments about the game itself or the upcoming campaign, please don't hesitate to post them in the comments below.