Hello my wonderful readers! It's May, and in keeping with last month's post, I'm posting my personal Top 5 Games that I've been playing this month. These games have been decided upon and ranked based on a combination of two aspects: both my general enjoyment of the game itself and the actual amount of times I've played the game. Recently, my gaming has been all about trying new things. In fact, 4 out of 5 of the games on this list I was introduced to and played for this very first time this month, (Bonus if you can guess which one isn't new... Hint: It's been on my top 5 list 3 months in a row now).

So without further ado, here are My Top 5 Games of May.

Take to the high seas and sail around islands and enemies, fire cannonballs at pirates and raid their ships to gain loot. In Rattle, Battle Grab The Loot!, you'll get to do all of this and more, taking turns dropping huge handfuls of dice (ships) into the lid of the game box and then battling it out until only one merchant or pirate remains. Every round, you'll draw unique mission cards that will implement unique rules, obstacles and pirates that can and will change how the game is played, forcing you to make tough decisions on how many ships you wish to send to sea and what loot you should stash. After every few missions, you'll then be given the chance to go to port and use whatever loot and doubloons you've stashed to improve your own, puzzle piece ship, hire new crew members, appease the Pirate King and more..

If this sounds like a lot, it's because IT IS. Nothing beats the thrill of the massive dice drops and the seemingly simple but incredibly difficult decisions you'll have to make in order to beat enemy and pirate ships to emerge with the most loot. Do you sacrifice a ship to raid another ship? Do you use your cannons to fire at other ships, knowing you won't be able to then reload them until you get back to port? There's too much to even talk about here and that's part of what makes this game so great. There's so much fun and crazy stuff going on with the dice dropping, missions, crew members, ship upgrades, obstacles, etc... This game is just big and a lot and fun and that's all there is to it.

Yup. Scythe is in my Top 5 once again. Scythe is an incredibly gorgeous and well-designed heavy 4X game. Each player will take on the role of a unique faction, and must move their workers and character across Europa, acquiring resources to deploy mechs, gain more workers, build structures, enlist recruits and fight each other. It has an incredibly high amount of variability, requiring players adjust and alter their strategies depending on what faction and player mats they are dealt. You can't use the exact same strategy from game to game, as you are almost guaranteed that you won't have the same starting setup as you did last time. Scythe has very easily become a Game I Love.

This month I was not only able to get it to table with some new players but I was also able to get a solo game played, which I thoroughly enjoyed. And now that I've gotten to pre-order the modular board for it, I don't anticipate it leaving my top 5 list for a while.

I was so incredibly happy to be able to pick up this game on sale a few weeks ago. Terraforming Mars is a game about.. terraforming mars. Players will take turns spending MegaCredits to play cards that allow them to play greenery, ocean and city tiles, increase and decrease their resources and resource production and much more. The cards have a wonderful engine building aspect to them, with some cards making other cards cheaper or providing you with benefits if you've already played certain types of cards, etc...Your end goal is to have the highest terraforming rating (points) when Mars is finally terraformed (all ocean tiles have been place, the planet's Oxygen has reached 14% and the planet's temperature has reached 8˚C). Players also score points for being the first to complete milestones and for being the best in whatever awards were funded over the course of the game.

This game takes awhile to figure out, but I really enjoyed the engine-building and the choices you have to make about what cards to keep and play, where to place different landscape tiles, etc.. There's such a high variability in what strategies you can choose to pursue, and I rlealy appreciate that it feels like everyone is contributing to ending the game. You're working together to terraform Mars, but only the player who has contributed the most to the terraforming when Mars finally becomes livable will win. This game does have a high learning curve, but once you get into it the game is a treat to play. 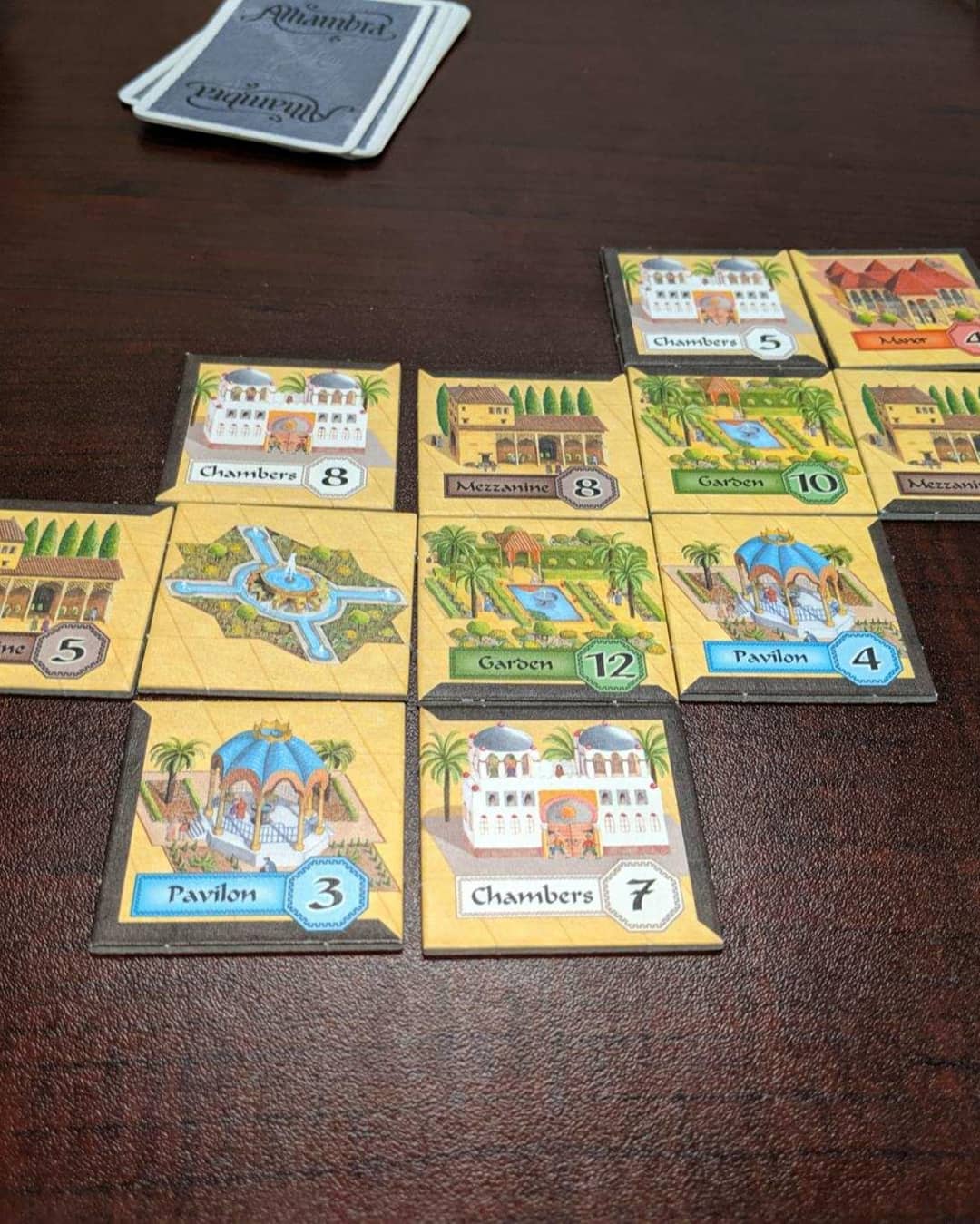 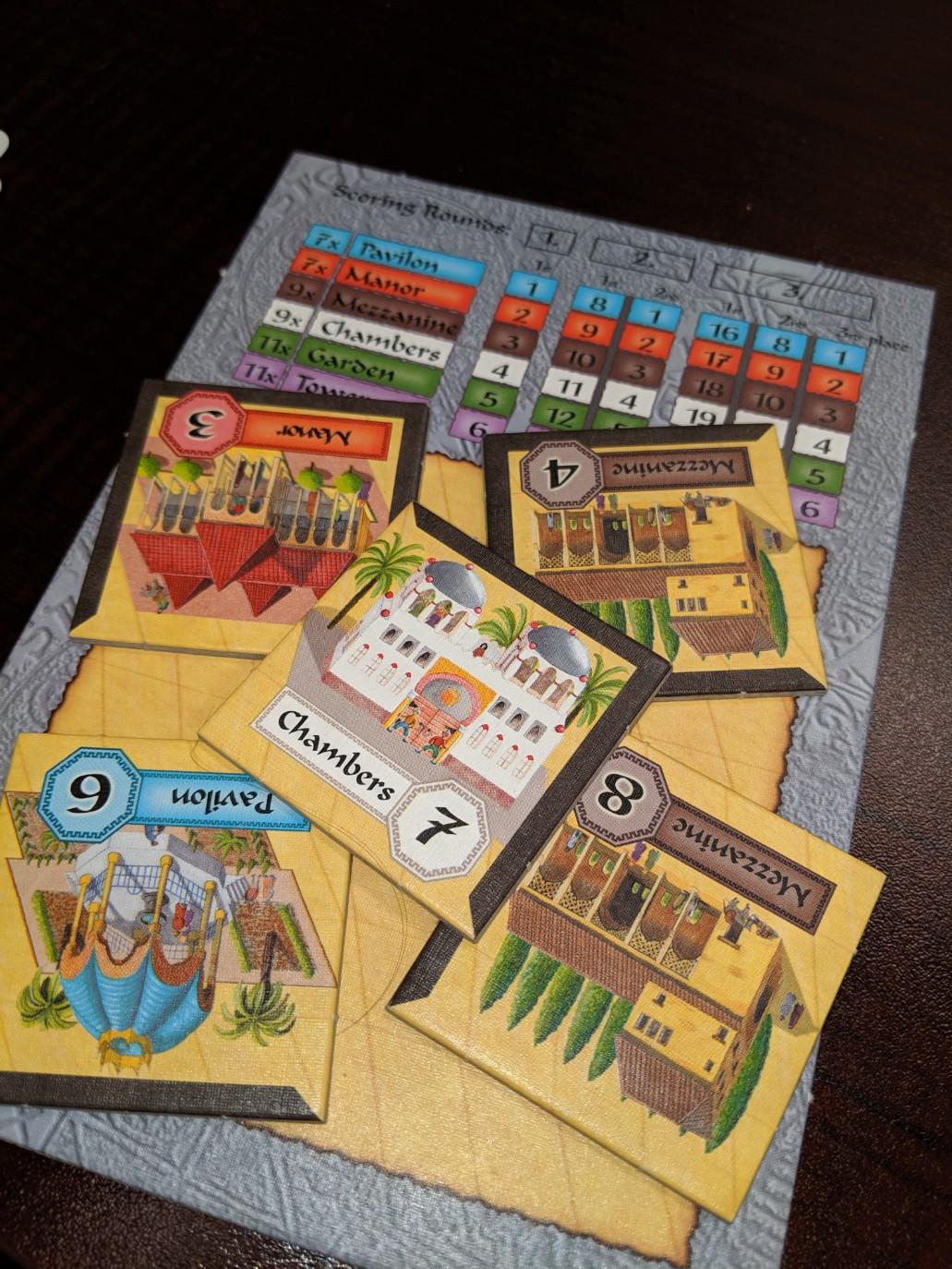 I had the pleasure of playing this nice, light tile-drafting game several times over the past month. In Alhambra, players will take it in turns to either collect money or buy one of the available face-up building tiles to place in their Alhambra. If you are able to plan out (or luckily) pay for a tile at its exact cost, you get to take another turn. The building of tiles can also be incredibly tricky. At the end of each of the three rounds the players with the most, second most and third most of each color of tiles will gain points accordingly. At the end of the game, players will also gain bonus points for their longest wall in their Alhambra. Then, the player with the highest score wins.

This game does a great job at making you feel like you have a lot of control over your strategy by forcing you to make tough decisions every turn. In reality, the game is highly dependent on luck of the draw, but that doesn't make it any less enjoyable. Trying to plan ahead to purchase tiles at their exact cost to take more than one turn in a row its ncredibly satisfying but can also be frustrating at times. Alhambra's light gameplay makes it highly accessible to new players while still providing good amount of decision making for players more used to heavier strategy games.

I hate bidding games. Well... hate is a strong word. I really don't almost every bidding game that i've ever tried. But, oh my goodness this is an absolutely fantastic bidding game. On your turn, you'll have the option to put one of several different items up for bid. Every other player will then get one chance to bid on the item. When the bid comes back to you, you can either pay the player who bid the highest to gain the item up for bid, or you can allow the player to pay you for the item. On your turn, players have to make decisions about what to put up for bid, do you put something up that you really want? And risk owing another player lots of money? Or do you put something up for bid that you know someone else want to take all their money? The money in this game is all in a closed system, which can make the bidding extremely interesting.

But what are you bidding for? Building pieces! In The Estates, you'll be building buildings on one of three different roads. However, you'll have to be careful about what roads you invest in. Because, the game ends when two out of three roads have been complete, and whichever road wasn't completed scores negative. This makes the game super interesting and can even lead to scenarios where the winner is whoever has the highest negative score. In the first game that I played, I won with a score of over 50 points, but in my second game another player won with a score of only 3 points. This is another aspect of this game that I love and think that is really interesting: there is such a huge variability in how you must strategize depending on how the building plays out.

What is your number one game that you played in May?

Let me know in the comments below and on Instagram!